Mosaic in Dialogue with Michael Dan

Mosaic in Dialogue with Michael Dan as he launches his book The Two-State Dilemma: A Game Theory Perspective on the Israeli-Palestinian Conflict. Missed the event? Watch the video, below!

The Mosaic Institute was thrilled to host a conversation with Michael Dan, about the principles of game theory, how he applied it to the Israeli-Palestinian conflict, and what his results mean for us all.

"Since biblical times, every major conflict in the Middle East has been framed as an “us versus them” trade-off: a zero-sum game in which one side's gains represent the other side’s losses. But there are other types of conflicts, which mathematicians refer to as non-zero-sum games, in which there is an opportunity for rational cooperation between two opponents." – Michael Dan, Senior Fellow, Glendon School of Public and International Affairs

Purchase an advance copy of the book for only $25.00* AND support us!

To take advantage of this special offer, send an email with your name and address to sarah@barlowbooks.com . All profits will be donated to The Mosaic Institute.

Michael Dan, CM OOnt LLD PhD (Hon) is a committed philanthropist and a model of social responsibility and generosity. A former neurosurgeon, he has funded organizations that assist marginalized people in Toronto and helped to create the first privately endowed research institute in the world geared to the unique health needs of Indigenous people. His commitment to peace in the Middle East is exemplified by his support for the University of Haifa, the Michael and Amira Dan Professorship in Global Health at the University of Toronto, and the St. John Eye Hospital in Jerusalem. Michael is a member of both the Order of Canada and the Order of Ontario. He is a senior fellow at the Glendon School of Public and International Affairs (York University) and holds three honourary degrees. He is available for comment and interview.

The event began with a brief presentation from Michael Dan, explaining why he chose game theory as a lens for analyzing the Palestinian-Israeli conflict and providing a short overview of how game theory works. Dan then demonstrated how it could apply to the conflict, using concepts like zero sum game and the prisoner’s dilemma. Dan emphasized that he is examining the conflict from a logical point of view that attempts to avoid “right” or “wrong” moral reasoning.

Dan continued his presentation by explaining the concept of the modern-day state and examining how it compares to the Israeli state. Dan notes a complication: that the area is so small that a two-state solution would be difficult and that there are alternatives that could benefit one side only or even one where the two merge into a single state.

Following the presentation, Akaash Maharaj, CEO of the Mosaic Institute, continued the conversation with Dan and then opened it up to Q&A with the audience. In conclusion, Dan left the audience with the possibility that a solution may already be close due to recent developments. 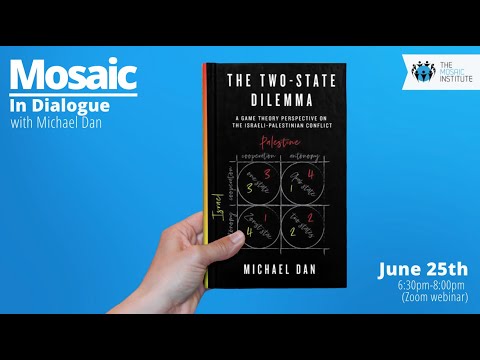